Wondering what exactly a bridal veil cut is and what the different options are? This guide will outline everything you need to know about this element of your wedding veil.

Firstly, the term ‘cut’ doesn’t completely describe this element of the veil. The veil cut actually refers to two features of the veil: (1) its shape and (2) how the veil is gathered at the comb. Depending on which veil cut you choose, it can help create fullness (also known as ‘pouf’) or keep the veil flat. The cut can also help create a more subtle or dramatic look. Let’s take a closer look at the veil cuts we offer here at Classic Veils. 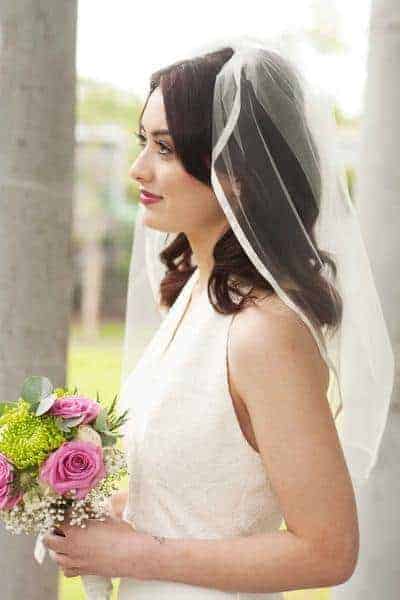 As the name implies, the standard cut veil is the most common cut chosen by brides. It’s a versatile cut that works well with many dresses and wedding looks.The standard cut features two separate pieces of veil tulle gathered at the comb to provide the most volume. The cut runs down along the bride’s side. In comparison to its sister cut, the circular veil, the standard cut offers slightly more ‘pouf’ and its tiers will appear longer than those of a circular cut. 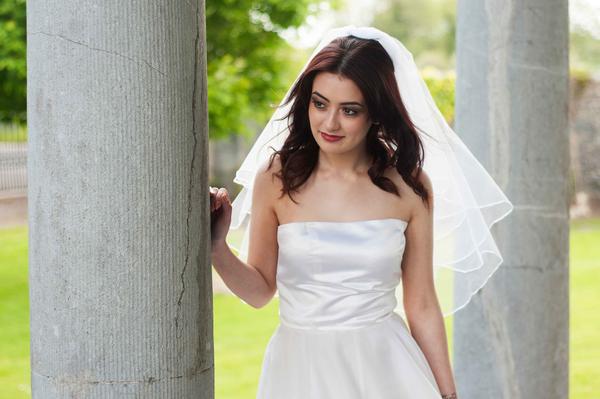 This veil cut is created with a circular piece of tulle that is folded over in two, gathered at the centre and attached to a comb. Because the edges of the veil are not gathered in the comb, it creates less ‘pouf’ than a standard cut veil. Another way it differs from the standard cut is that the fabric will drape down the shoulders in a bit of a zig-zag pattern because it is made from one piece of fabric. As a result, the top tier will appear shorter.

The bottom of the veil also forms a circle, so the edges fall around the bottom instead of your face. This makes it a great option if you are wearing your hair down and want it to frame your face (instead of the veil). Because it is folded in half, this style of veil (as well as the drop cut) comes in even-numbered tiers – two or four-tiers being the norm. 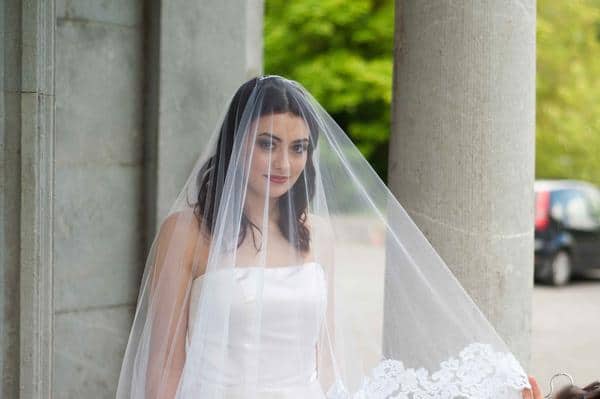 The drop cut veil is typically worn draped over the face. It is similar in construction to the circular-cut, except that it has no gather at the comb. Instead, the fabric is sewn to the comb to remove any volume. The resulting look is flat, sheer and dramatic. The drop veil has proved trendy in recent years and creates a unique, stunning wedding look. As with the circular veil, the edge is at the bottom, of the veil, so this option works especially well if you are wearing your hair down. 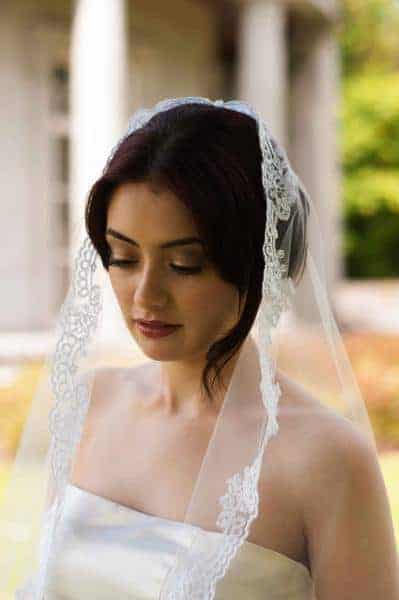 This traditional Spanish veil is a unique, dramatic design that generally features a lace edge and a round or oval cut of fabric. The mantilla veil is secured to the head on one side and features no gather at the comb, thus it can create a beautiful, flat look.

Typically, the mantilla is worn closer to the front of the head, so that the veil drapes softly over the bride’s shoulders. As always, however, the choice is yours. The mantilla can also be fastened to the crown or lower back of the head, and can be designed with a cascading cut or rounded square edges.

If you’re wearing a silhouetted lace dress, the mantilla veil will pair beautifully. On the other hand, it may not be the ideal match for a fuller princess-style ball gown.

A folded cut veil is similar to a drop veil, but it has a 3” fold at the comb. Like the drop and circular cut veils, the folded veil is made from one piece of fabric, folded over to create a two-tier veil. Like the drop veil, it has no gather and is therefore fairly flat. An elegant and simple style that pairs well with a down hair style.

An angel cut veil features a V-formation at the bottom of the veil and folds on both veil sides before tapering at the bottom. It creates a soft, cascading look that works particularly well with knee length or shorter veils.

The rounded angel cut veil is just what the name implies. It is very similar in design to the angel cut, with folded veil sides that taper to the bottom. The only difference is that it has a rounded cut at the bottom, rather than a V-formation. This creates a timeless, soft look that works well with shorter veils.

A cascading or waterfall veil is cut in such a way that the sides of the veil fall in a cascading style. It creates a soft, romantic look that works especially well with shorter veils. The angel cut veil is one type of cascading veil, however, there are a number of other cascading styles that a bride can choose from.

Now that you have a better understanding of the veil cut options available, take some time to consider which style will best suit your dress, hairstyle and the overall wedding look you want to create. You’ll also want to think about which cut to choose based on other veil design elements you’re considering, such as length, width, and veil edging. Check out our other guides for more details on these elements.

Looking for your own beautiful bridal veil for your big day? Check out our custom Wedding Veil tool builder to create your very own one of a kind veil.